The HCBA held its monthly luncheon at Kelsey’s in Ellicott City on Wednesday, November 18, 2015.  A panel of speakers presented on a variety of issues relevant to veterans and to current service members.  The panel included presentations on the Veterans Treatment Court initiative by Judge Louis A. Becker (Ret.), also a retired Lt. Colonel.  He was followed by David Burkhouse, who served in the United States Army, and  who spoke about the various aspects of the Servicemembers Civil Relief Act, which provides for the temporary suspension of judicial and administrative proceedings and transactions that my adversely affect the civil rights of service members during their military service.  Finally, Major Rose Forrest from the Judge Advocate General’s office of the Maryland Army National Guard provided information about the services offered to National Guard members by their office.  Major Forrest was accompanied by First Lieutenant Rebecca Earlbeck and SFC Salvatore Lumaro from her office.  A question and answer session followed the presentations.  The well-attended event included Judges Tucker, McCrone, Bernhardt and Magistrate Porter from the Circuit Court, as well as Judges Brown and Brooks from the District Court.  Also in attendance was Byron Macfarlane, the Register of Wills.

The link provided gives an overview of the Servicemembers Civil Relief Act. SCRA 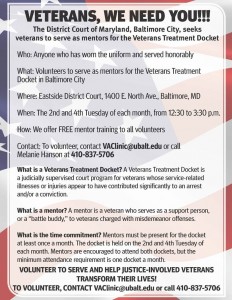