As we are all painfully aware, Ellicott City was severely damaged by flood waters on July 30, 2016. Afterwards, business owners, landlords, tenants, employers, employees, and others throughout the affected area began to look for what to do next and how to move forward. After all the rain had subsided, surveying of the damage and clean-up efforts began swiftly. The constant question from everyone, including many members of our own Howard County Bar Association asked, was, “After such a horrific storm, what can I do personally to help those in need?”

The Howard County Bar Association’s response was to offer free legal advice to those looking for answers in such a time of need. The HCBA answered the call to help and was led by the efforts of Ryan J. Dymek, and other lawyers, law firms, non-profits, government entities, and politicians from the local, county and state levels. Working quickly, the HCBA was able to organize a week long volunteer effort that was held at the Disaster Assistance Center throughout the week of August 8th. For five hours a day, volunteers were at the center and met with affected people, offering their assistance in any way possible.

Through the efficient and operative efforts, many victims were helped at the center. Oftentimes, when people visited the HCBA table, they had not even begun to think about the legal issues they would face and would imminently encounter because of this disaster. Everyone that visited the center was extremely grateful and appreciative of the efforts of the HCBA.

On behalf of the HCBA and the entire community, I personally want to thank those who graciously volunteered their time this past week at the center: Thomas Beach, Emily Belanger, Darren Burns, Denny Donovan, George Hermina, Jac Knust, Mathew Limsky, Jennifer Lubinski, Tom Meachum, Lindsay Morrow, David Muncy, Michael Ostroff, Bruce Plaxen, Josh Plaxen, Dalene Radcliffe, Andrew Robinson, Tony Salazar, Harry Siegel, Katherine Taylor, and Jack Willis. I would also like to thank Kevin Kelehan for getting the HCBA in touch with the right people and Carol Hindle from his office to make this effort happen. As always, our Executive Director Gina Wrobel was an incredible asset to the Bar and community, and her efforts to assist are greatly commended.

Also, I think it is very important to thank everyone involved from the Howard County Executive’s Office. Without leadership from them and specifically from the Executive, Alan H. Kittleman, efforts such as ours would be incredibly difficult.

As we move forward as a community, let us not forget that those affected will continue to need our help. In order to continue to assist the people affected by this disaster, the local government and non-profits now have our HCBA Lawyer Referral Service information and have been sharing it with those in need.

Day-to-day and week-to-week, the needs of those affected will change, and I know the HCBA will continue to be here to help. It is so truly nice to live in a place where you can count on your neighbors and friends to lend a hand. 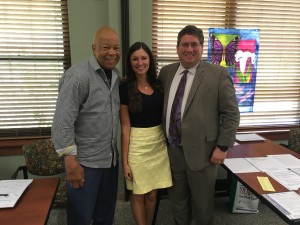