As they begin to move on, the law clerks from 2015-2016 gathered for a final photo and interviews by this intrepid reporter:

Judge Gelfman’s law clerk, Meredith Lenore Pendergrass, grew up in Maryland, attending Damascus High School.  After spending one year at Virginia Military Institute where she was a member of the marksmanship rifle team, she completed her college career at University of Maryland, Baltimore County, graduating with a degree in political science.  She worked for six years at a boutique criminal defense firm in Rockville, leading to her decision to attend law school.  While continuing to work full time at that firm, she attended University of Baltimore Law School night program, ultimately graduating summa cum laude.  She participated for two years on the Moot Court Telecommunications Trial Team and won Best Oralist in the national competition in 2014. While working full-time and going to school at night did not provide enough time to participate in a journal at law school, she was still able to have her article on Kirk Bloodsworth and the Maryland death penalty published in the University of Baltimore Law Forum in 2014.

Meredith has found her year with Judge Gelfman to be an eye-opening transition from classroom to the actual practice of law.  She feels she has had an insider’s perspective on how she wants to be perceived as an attorney, including the good and bad versions of oral and written advocacy.   She has learned invaluable lessons from Judge Gelfman’s approach to both the law and administration of a judicial system.  Married to Nicholas Newell, the Vice-President of Hyattsville Door & Frame, Inc., she has a 9-year-old stepdaughter, Abby, who is entering the 4th grade this fall.  Meredith enjoys spending time with family and her pets.  As someone who sees herself as a career litigator, she looks forward to her new position as an associate attorney with Semmes, Bowen and Semmes working in Workmen’s Compensation Defense

Judge McCrone’s law clerk, Samantha Sherman is another Maryland girl.  Born and raised in Derwood, Maryland, she attended Magruder High School.  From there she went to University of Maryland College Park where she studied special education.  Her interest in education policy led to her decision to attend law school.  Staying in Maryland, she attended the University of Maryland School of Law.  There, she participated in the Maryland Education Law Project, becoming Secretary of the Project.  She developed an interest in Trademark/Intellectual Property Law and Family Law.

Samantha determined that spending the year as Judge McCrone’s law clerk has made her happy with her choice to become a lawyer.  She believes that this has been her best year yet, and that she will miss being a part of the courthouse staff.  She has learned a great deal from Judge McCrone and hopes to take that knowledge with her, making her excited about the future.

Hoping to remain in the Howard County/Montgomery County area, Samantha spends much of her free time with family.   Her father owns an entertainment company where Samantha has worked in the past.  She relaxes with friends and family at home and in Ocean City.  She also enjoys spending time with her dogs, miniature Dachshunds and a Shepard Beagle mix.

Morgan Appel has been clerking for Judge Bernhardt for the last year.  Another native Marylander, Morgan grew up in Baltimore County, attending Pikesville High School.  She moved onto George Washington University for her freshman year, playing lacrosse.  She transferred to the University of Maryland College Park, where she studied family science and social work and participated in sorority life.  Active at the University of Baltimore Law School, Morgan, along with fellow clerk Mary DeCampo, was associate editor of the Law Forum.

Morgan believes she has learned in her year as a law clerk than her entire law school time.  She found Judge Bernhardt to be smart and concerned about the outcomes in the cases he presided over.  She feels she has learned how to be a good advocate and litigator.  She is looking forward to moving to Bethesda and beginning to work in family law at Meiselman & Helfant.  In her free time she enjoys hanging out with friends and family, as well as participating in various forms of exercise including running.

Shivani Aghera had the experience of clerking for a new judge shortly after Judge Kramer was appointed to the bench.  Growing up in Howard County, Shivani attended Long Reach High School where she was Class President.  She left Maryland to attend college at The Pennsylvania State University, where she majored in Business Economics.  She also participated on a dance team and was a member of a business fraternity.  She went on to attend law school at the University of Baltimore School of Law, where she was a member of the Student Bar Association.

Clerking for Judge Kramer for 18 months provided Shivani with a rewarding experience, especially with her strong interest in Family Law.  She was excited that she learned her role as a law clerk while Judge Kramer was learning her role as a Judge.  Shivani felt that the process has allowed her to smoothly transition into her future endeavors. She enjoyed Judge Kramer’s sense of humor and kindness, and with Judge Kramer’s encouragement was able to get out into the community during her time as a law clerk.   She will be joining Abramson & Rand when her clerkship ends.

Mary DeCampo, Judge Tucker’s law clerk, is the sole clerk this year who grew up outside the State of Maryland.  A native of York, Pennsylvania, she attended York Catholic High School, where she was a cheerleader.  At University of Delaware, she studied political science and history.  She attended University of Baltimore Law School, where she was an associate editor of the Law Forum.

Mary credits Judge Tucker with helping her obtain her job at the Office of the State’s Attorney in Howard County.  With her sister living in the area and her parents now living in Anne Arundel County, Mary wanted to remain in this area.  She feels her decision to ask to be a law clerk in Howard County, and with Judge Tucker, was a good one, allowing her to learn about how the law works in the judicial process.   Being close to family has allowed her to spend time with family and friends in those free moments she has had while clerking.  Now working in the OSA, in the District Court, she is able to apply what she has learned as a law clerk.   She continues to hang with friends and exercise in her free time. 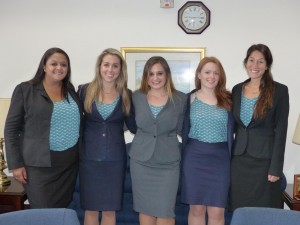